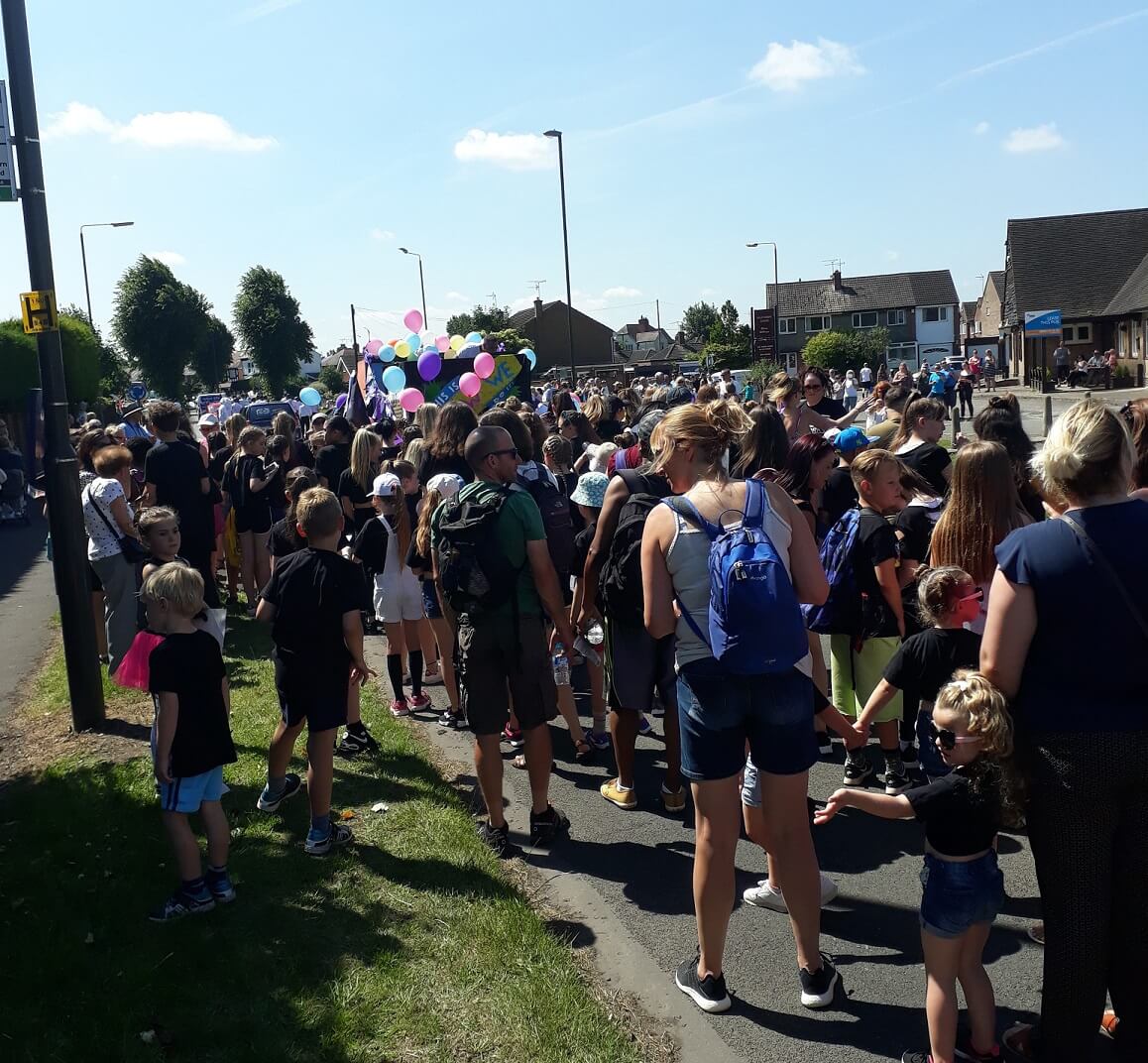 Whoever was in charge of ensuring glorious weather for the Long Eaton Carnival 2017 on Saturday 17th June deserves a pint (or two, or three…) – it was a scorcher! Glorious! With news that the Ilkeston Carnival being cancelled just the weekend before due to water logged pitches, we were nervous that it may not go ahead – with English whether you just can’t be certain. Saying this, talking to the carnival goers at the weekend, they usually get rain, but never enough to stop the parade from going ahead.

If this is the first time you have heard of the Long Eaton Carnival and live in the midlands, firstly where have you been? Secondly, have a read of our other blog which goes in to detail about what the carnival is and basically how amazing it is! 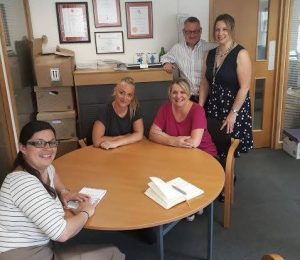 Director, Russell Geary, is from Long Eaton and has always attended the carnival from when he was a child. Every year companies and organisations from in and around Long Eaton get involved and the effort they put in to their floats for the parade and stalls for the carnival after is truly amazing! One of the loudest and probably most spectacular floats has to be that of Vibez Danceworks, who are based in the village. It was a privilege to be involved in the carnival this year and to be able to sponsor and share the experience with the dance company.

Starting the day with bacon and sausage sandwiches…

The day started early (well early for a Saturday morning) with some of the RDG team meeting at the base (Russell’s house) for 8am, so we could help Vibez dress the truck ready for the parade. Seeing as it was going to be a full fun packed day we had to fuel ourselves properly with tea, coffee and sausage sandwiches! The sandwiches were delish and courtesy of Russell’s wife, Helen. Some of the team even joked that this was how every morning should start at work… not sure how happy Helen would have been with this arrangement! Another nice surprise was being welcomed with homemade lemon drizzle sponge, baked by one of the Vibez team. 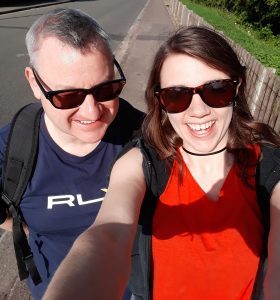 Sarah and Russell having a shameless selfie… 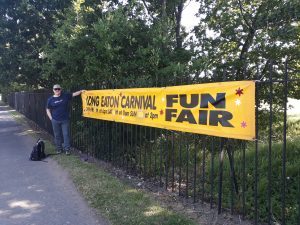 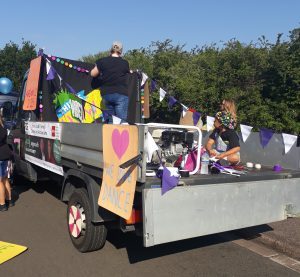 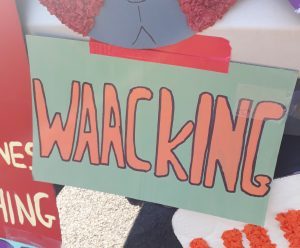 We guess this is some sort of dance style?

We did lose a balloon or two whilst we were dressing the truck, but we are sure you’d agree that the truck looked great!

Back to base to meet the rest of the team…

After we had done our bit, met Melvin the DJ (who did an exceptional job during the parade saying how hot it was…) and finished the lemon sponge (most importantly) it was time to head back to base and meet the rest of the RDG team for a final briefing of the day and a spot of face painting. Come on it’s not a carnival without that is it…? 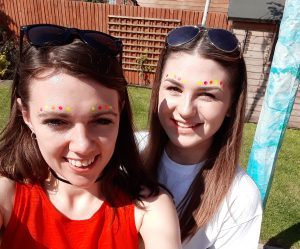 Sarah and Georgia with their face paint

Off to start the Long Eaton Carnival parade…

When everyone was happy with their face painting (and Russell has rubbed off the bit that got on his nose… he was adamant that he didn’t want any but the team obviously had other ideas…) it was time to head to the carnival grounds to meet Vibez, (whose team had grown by a fair few…) and wait with the other trucks for the parade to kick off! 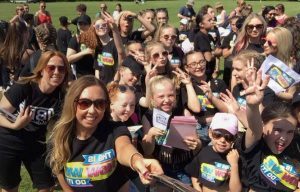 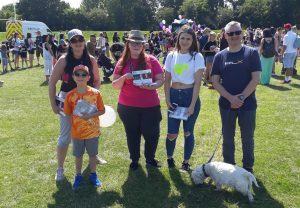 RDG team at the carnival grounds

Anticipation waiting for the parade to kick off…

As the team headed towards where Vibez had set up camp, everyone commented on how great and buzzing the atmosphere was. Walking past all the other floats, it was clear that everyone had put a lot of effort in and those watching the parade were in for a treat! Vibez float, even though it was smaller than usual, still stood out and Melvin was on good form playing some great tunes.

At about 11am, the parade kicked into gear and we were off. The floats were buzzing and people walking in the parade we’re laughing, chanting, singing and dancing. It was great to be involved with it all. 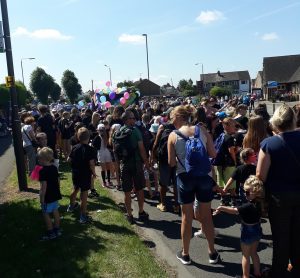 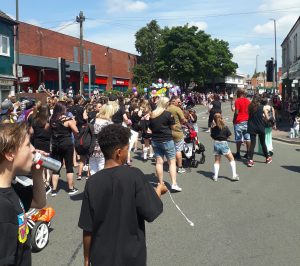 Vibez were amazing, even though it was a scorcher, they still had plenty energy which was evident when they stopped at certain intervals to do a number of different routines to entertain the crowds. Their float is usually bigger, with the dancers doing dance numbers on the truck, however, this year they decided to do hit the streets. Great shout!

So many different stalls…

The parade made it’s way back to the grounds, where the carnival had well and truly kicked off. The team went on the hunt for the Vibez and RDG stalls, just behind the food vans and rides, which were being manned by Russell, Helen and Lewis the dog. Even though there were impressive rides and a variety of entertainment going on in the different arenas, the stalls were still very busy!

On the Vibez stall there was a raffle taking place… Sian (accountants assistant) had her eye on the magnum of prosecco and even after 6 or 7 goes, sadly didn’t win. Our stall was mostly taken up by sweets, with a large glass jar full to the rim taking centre stage. Children’s (and even adults) eyes lit up when they walked past and when we told them that all they had to do was guess how many was in the jar to win it, they just couldn’t say no! 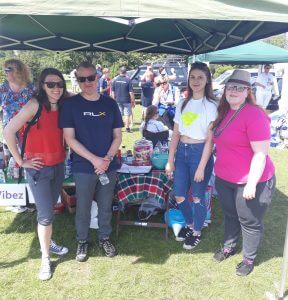 Smiley faces from the RDG team 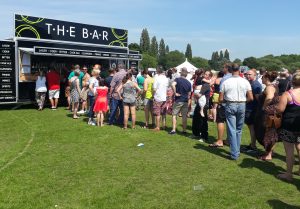 These people have the right idea

At about 3pm, it was Vibez turn to take to the arena and show the routines they have been working so hard on for the last few months. They did themselves proud and it felt that when their last routine came to an end, the crowd wanted more!

We loved being part of the Long Eaton Carnival. It was great to take part in the daytime activities and see Long Eaton truly come to life. Before the carnival, one of the team came across a blog by the Long Eaton Swimming Club, asking for donations for their tombola they were having on the day. We donated two tins of (posh) biscuits and when we went to the club to hand them over, it was great to meet the Chairman Duane and hear everything that the club does. Which was very impressive!

Thanks to the RDG team and Vibez…

We would like to say a huge thanks to the staff members who gave up their Saturday to be involved in the carnival and make it as successful as it was! Also, a big thanks to Vibez who let us be involved with them and everyone else who made Saturday truly awesome!

We're thrilled to be part of the Long Eaton Carnival 2017